Extreme heat and severe storms, tornados included, have taken a toll in Ontario.  Fire bans have become a necessity for safety and although they cause a need to become more flexible on your trip plans, they also ensure that yesterdays beauty and memory will be there again next month or next year.  I remember a fire scar across Temagami so many years ago; barren land void of any significant growth and a reminder of the Smokey the Bear days for good reason.

Some time ago the kids mentioned about going to some waterfalls they’d heard about and we said, “OK, next weekend we go!”  Well folks, the storms went through here on Saturday afternoon and we filled a rain barrel in minutes!  Sunday morning came and for some reason I heard the clock peel off the 5, 6, and 7 bells so I thought this a calling and pulled on some shorts and set the coffee pot to work.  Izzy had an idea of his own that it was about Pee o’clock so he had no issue with me getting dressed and finding his collar.  Off we went, man and faithful companion and the winds grew and the skies darkened to that nasty shade of purple/black and thoughts of driving north and trekking through the woods appeared somewhat dim in my mind.

Coffee in hand and Izzy well into his breakfast bowl, Karin rounded the hallway and asked about the weather and the whether!  If the weather was in favour for the trip and if we should go.  I said,” You know what Babe? We tell the kids we’re going on this day and then bail due to the weather…..what values are we teaching?  We’re going and the worst thing to happen is we stop as a family somewhere new for lunch!”

Water falls, here we come.  Oh, by the way, where are you?  Well, they weren’t exactly where we thought they were so for $19.95, the Ram now has a detailed map book of Ontario and (insert drum roll here), the kids are getting so much better with north, south, and left and right!  By the way, our tailgate lunch in Parry Sound was “a beautiful thing”!

Back down Hwy 400 (I will always refer to it as Hwy 69, I’m old so I can do it) and jumped off on our new target exit in search of “the falls”.  Up and down we went on such a winding road, over streams and past lakes until we came upon our road.  Tarmac slowly gave to a gravel entrance and finally to a grassy spot to park the truck.

The path lay before us and entered a fairly dense forest, yet the trail was very good; right up to the climb!  Here, the forest floor rose before us and the roots of the trees seemed to reach from the dirt to catch your shoe mid stride.  Off to the side the river could be heard as it gently kissed the rock on the way to it’s brink.  We knew the very second we hit the crest of the climb and the thunder broke as the flow of the river cascaded over the falls.

The kids broke down the trail and were very quick to enter the pool below the falls.  That’s exactly where they stopped and proceeded with caution to avoid both the slippery surface of the rock and the current provided by the falls.  Mom was quick on their heels and smiles flowed as freely as the current. Emma stated that she wanted to make a list of water falls to visit and nobody else can find fault with that after today.

Feet dried off and bathing suits changed off, we headed for home after another great day spent out of doors.  Marvin said he had a great time after we let him out of the glove box…..Emma?  On a humorous note, we were flying down a road and ….SWOOSH…there goes a canoe trailer for sale.  A 4-bed wagon that would be right up my alley.  Well a quick turn within a half mile and a couple of phone calls later, don’t we have some more laughs  due to people we collectively know.  So glad I came to learn about the lifting of the Algonquin Park fire ban when I did!

Any one know what water falls and potato chips have in common?  You can’t have just one!  I’m thinking a prize will be in order for the first correct guess of both falls. 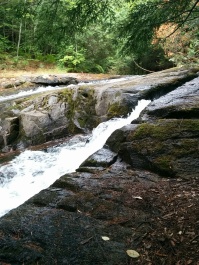 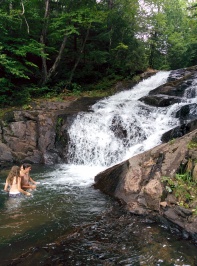 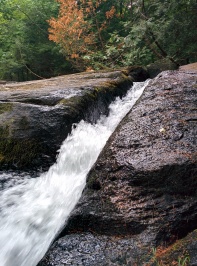 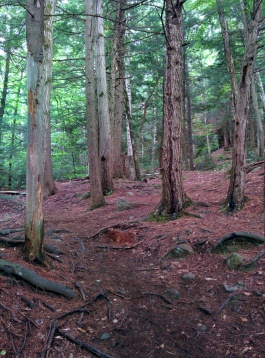 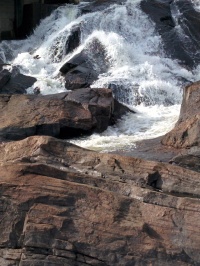