I’d just poured a cup of coffee and the idea hit me like a flash.  Izzy knew something was up and he came right over and sat at my feet, head up, with those beautiful brown orbs, he sat waiting to hear the news.

I had a repair kit sitting at Swift Canoe and Kayak and I thought that with such a brilliant day outside, I would drive Izzy up to Gravenhurst for an outing and I could also pick up my parts and have a look at the new canoes.  I got in touch with Swift and Scott said it was a busy time as product was being loaded for another trade show.  Hey, big and busy are often found in the same conversation.  Good news to hear and adventure on so I broke the news to Izzy.  Well the tail wag and the head to head …..”Did I hear that right, you have to buy….look at canoes?”  and I knew in a heartbeat he was game.

Light traffic and “Willie Nelson” blue sky overhead, some water in a bottle, Izzys’ water bowl and we were off.  I know that road like the back of my hand and the sights continued to unfold as we drew near our destination.  Finally the dinosaur flashed its’ teeth by the dock dealer and I started to tick off the driveways until finally that familiar yellow and brown announced the “next stop” was right here.

Upon pulling into the driveway you could see there were trucks and trailers here, there, and what do you mean, WHERE?  We decided to park out of the way of the activity so I puled in right in front of the , AGGGGHHHHHH! …..”the Prospector rack!”

The Prospector Rack!   The cool trickle of sweat made it’s appearance on my brow as Izzy paced from window to my shoulder to the window.  Glossy cherry and the famed cross hatch of carbon tech.  We sat, frozen in front of a wide rainbow of colour and performance.  It was as if Agents Izzy Skully and Mulder had reached the point where they were going to put an X on this file.

Finally, I broke the trance and slowly exited the vehicle, making my way to the beckoning front door.  Within seconds my kit was located and purchased which allowed me time to meet Scott, personally, and yak in general about some of the canoes.

“See ya later”, was said and I made my way back to the truck, and yes, David, it is another Ram 1500, when I caught Izzy, overseeing the loading operation while viewing the storage racks…..almost as if he were making his pick.   It took me a long time to get his backside into his seat so I’m guessing he had a solid pick.  On the way out to the highway Izzy nudged me so I swung left past the racks, each holding 4 of the Northern canoe lines.  Izzy barked and we stopped at the first rack as something didn’t appear to be right…..why only 3 canoes in that rack?  Oh well, just another Northern mystery.

Our little pup was very quiet on the way home and it was the first time during our trip that he actually lay down.  When I asked him if he had enjoyed the outing, I got a peculiar look as you can see in the photos.  The only thing I can figure is that perhaps I was speaking too fast and the “buy some” and the “look at some canoes”  ran together as “buy some canoes”.

Hey,  I’m sure with some biscuits and some time, we can always put together another road trip, for whatever the reason. 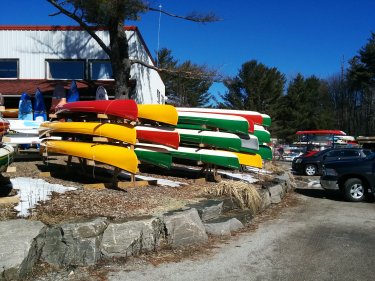 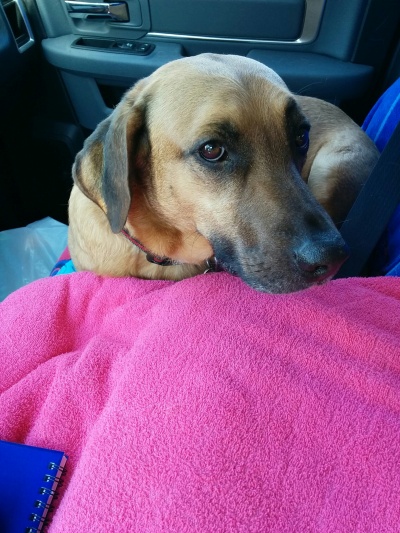