December 9th in the face of yet more snow north of us what other choice did we have? Canoeing? ABSOLUTELY!!!

Jay Naismith rolled up early this morning with his signature Sawyer for soloing….see how smoothly that sounds… and switched it onto the trailer where the Expedition from Composite Creations sat waiting to get out of the gate. More on this jewel later!!!

I don’t know how many of you have winter canoed or winter canoe camped but there’s a few added features to consider such as snow, ice, snow covered firewood, loosing weight by falling out of the canoe and freezing your arse off, so some added precautions were warranted such as a sleeping bag, ground mat, and a tarp as well as the cooking department and food…..just in case. Off we went to the secret location only to find copious quantities of snow and the road closed! DUM DA DUM DUM! As a highly skilled and professional driver I skillfully executed a 3 point turn with the trailer on……. No I didn’t! I backed in the laneway right at the closure and turned around.

Our first target launch only had about 40 feet of “I’m not going anywhere” ice out to the open water so we passed on that and found a spot to safely park a short distance from the river. The piece of gear that made me most pleased to have was my dry suit from Mythic Gear. This was a no “dry suit – no trip” for me! I’m also pleased to state that I successfully portaged the canoe and 2 relatively light packs for quite a distance…by using my throw-bag line and towing her over the freshly fallen snow. Ok, it was downhill so I won’t say how many times I stopped on the way back.

There’s such a rush I feel when your gear is stowed and you bend over to get in and give the canoe that shove to get into the river. Today was even more special as I’d, actually, we had never done this before. This late in the season, this much snow, (which was still falling), plus there was ice everywhere. The first major laugh of the day was at Jay’s expense as he made a perfect turn and back paddle right under an overhanging conifer and enjoyed one of the longest snow showers I’ve ever seen. Definitely not the last laugh of the day.

The only sound was the kiss of the water to the hulls of the canoes and the swish of paddle shafts carving the way. I swear, you could hear the snow flakes hitting the packs! Jay knew the route and lead the way around the first point towards our first portage of the trip and what a sight! Likely a half kilometre of solid snow covered ice. With private property lining either shore towards the dam it was time for Plan B. Off we went upstream after playing in the ice for a while. Honest to God, I’ve never seen anything like it…..fascinating! Some areas you could see the ice starting to form and other areas you just knew not to test. Well, with the exception of one! Jay seemed to veer, by will into the ice packs and one area I followed trying to capture a photo. That’s when my canoe stopped….and I mean stopped almost dead! I didn’t get the shot but I was able to back up a bit and take another attempt to free myself from the ice which did not break. The canoe came up on the ice and pushed the whole sheet like a hydro foil.

We proceeded up river for quite some time until we decided it was time to turn tail and head for lunch. Along the way we had time to both talk and reflect on our own thoughts. I’m convinced this is one of the prime features of paddling.

So as a trip conclusion I offer that we had good weather as the snow added one of those wonderland moments and the location was superb for a first winter paddle. The equipment performed beyond expectation between the new canoe and the drysuit with being layered up. I wish our daughter had been with us as she is soooooo much better at photography than I. At the onset of The Canoe Collector, I said I wanted to try as many new things as I was able to within my comfort zone. I wasn’t comfortable leaving the house this morning but you know what? Gear is still packed and I may just go back tomorrow!!! There’s risk in every thing so ask the question, get the qualified answer, pick up the proper gear, and throw it against the wall.

Today was one of the best paddles I’ve ever had! 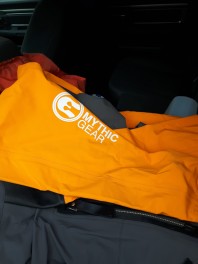 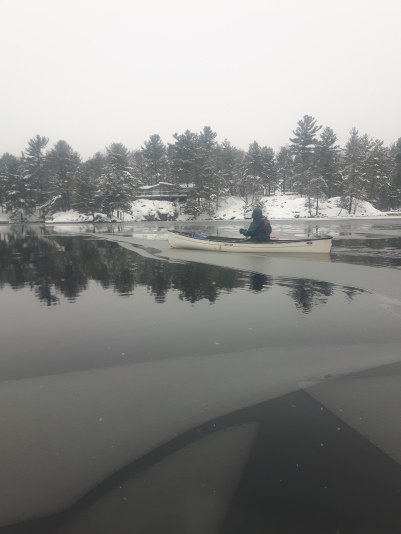